Rates
We offer several different trips and packages. Browse our rates and book your trip in advance.

Reservations
Schedule a guided fishing trip with us today, you will be glad you did!

Posted on April 23rd, 2017 by allanglersguide

Out from 5:30-11:30. Ended up with 6 browns, a coho, a fat laker and the first king of the year. Stayed in shallow water (30-50fow) for the day with glow watermelon from moonshine spoons the most consistent producer off a rigger. Just needed a steelie for the Grand Slam! Was a great time! 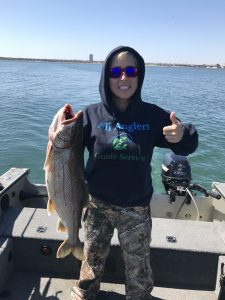 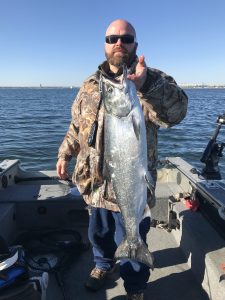 Posted on April 18th, 2017 by allanglersguide

Made it out this morning greeted by beautiful conditions with light SW winds and sunny skies. That lasted all of 15 minutes until a front moved in bringing strong N-NE winds, clouds and thick fog. We ended up 7-11 in tough conditions with 6 browns and 1 coho. Stinger UV spoons were the most productive flat lined with a 2 oz snap weight. Riggers only caught 1, boards with 2 and 3 color lead only caught 1. 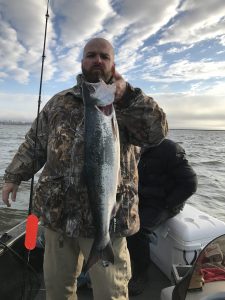 Posted on April 15th, 2017 by allanglersguide

In early April we started fishing for Brown Trout in the Milwaukee Harbor as well as shallow water in the main lake. Fishing has been nothing short of spectacular. Running small Moonshine glow spoons as well as standard sized UV Stinger spoons have been on fire. We’ve only taken a handful of fish on crankbaits run on planer boards which is odd, but we’ll keep giving them what they want. There have been several nice early King Salmon caught by anglers Brown Trout fishing which is great to see. We haven’t been lucky enough to hook up with any kings as of yet. The frisky Coho Salmon will show up fairly soon as well. In the next couple of weeks, my time will be split between the Brown fishing as well as walleye fishing on Winnebago. 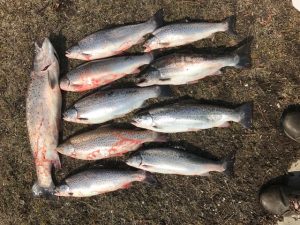 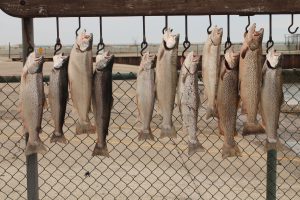 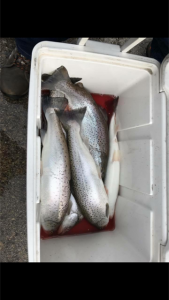 Posted on April 15th, 2017 by allanglersguide

We spent a couple days in March fishing the Wisconsin River in the Dells. We were able to find some legal fish as well as a couple slot fish and of course a whole bunch of sub-legal eyes to keep the action steady. We used 1/4oz VMC jigs in brown and black as well as firetiger tipped with a minnow. Casting to current seams was the most effective presentation. A slow presentation was the key.

Posted on April 4th, 2017 by allanglersguide

Please take a look around and check back often for our latest fishing reports and photos.