Rates
We offer several different trips and packages. Browse our rates and book your trip in advance.

Reservations
Schedule a guided fishing trip with us today, you will be glad you did!

The coho salmon beatdown continues off the coast of Milwaukee. The coho that were shallow earlier in the spring have moved offshore. We have been having the most success in 120-180 feet of water. Orange, six inch flashers with peanut flies in purple and black have been the top producers run behind boards.. 8 inch Pro King flashers with Poseidon’s Milwaukee Minnow has been good for deeper fish on downriggers. Baby spin doctors run on shallow dipsys have taken coho along with the occasional steelhead. King salmon have been sporadic, but we are catching a few on the deeper downriggers.

We had trouble finding the active crappies this week. They may have slid deeper off the first breaks and suspended. We haven’t put a lot of time into looking for them as we’ve been playing with the bluegills and bass. It really doesn’t get much easier to catch gills and bass right now. Throw small jigs with a chunk of crawler near any dock with weeds and you will get gills or bass or both. The quick warm-up we had caused a lot of algae/green slime which blew into the shallows. If you could tolerate cleaning your line of the slime after every cast, you were rewarded with constant action. The algae should clear quickly. The water is very, very clear right now so long casts are key not to spook the shallow fish. 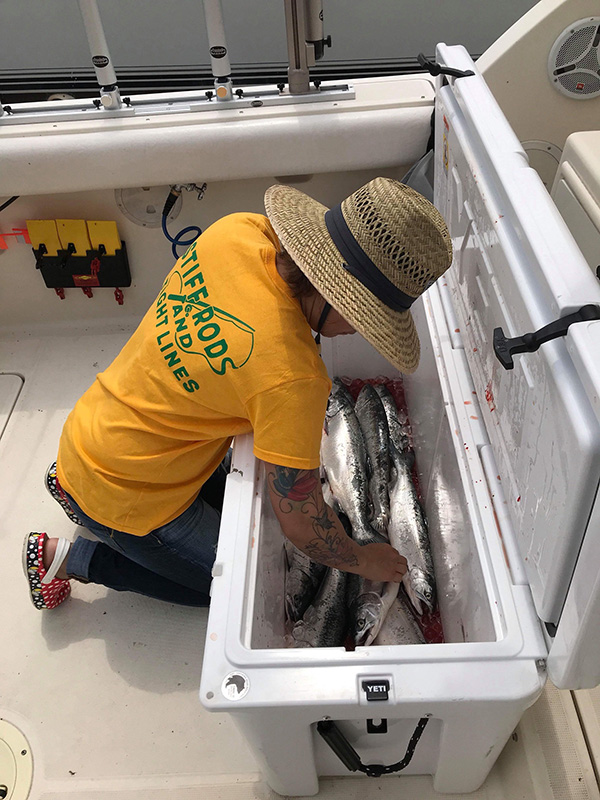